More than 50 years of experience has taught us how animals, humans and nature are connected. Together we are nature. We would love to include you in our story. 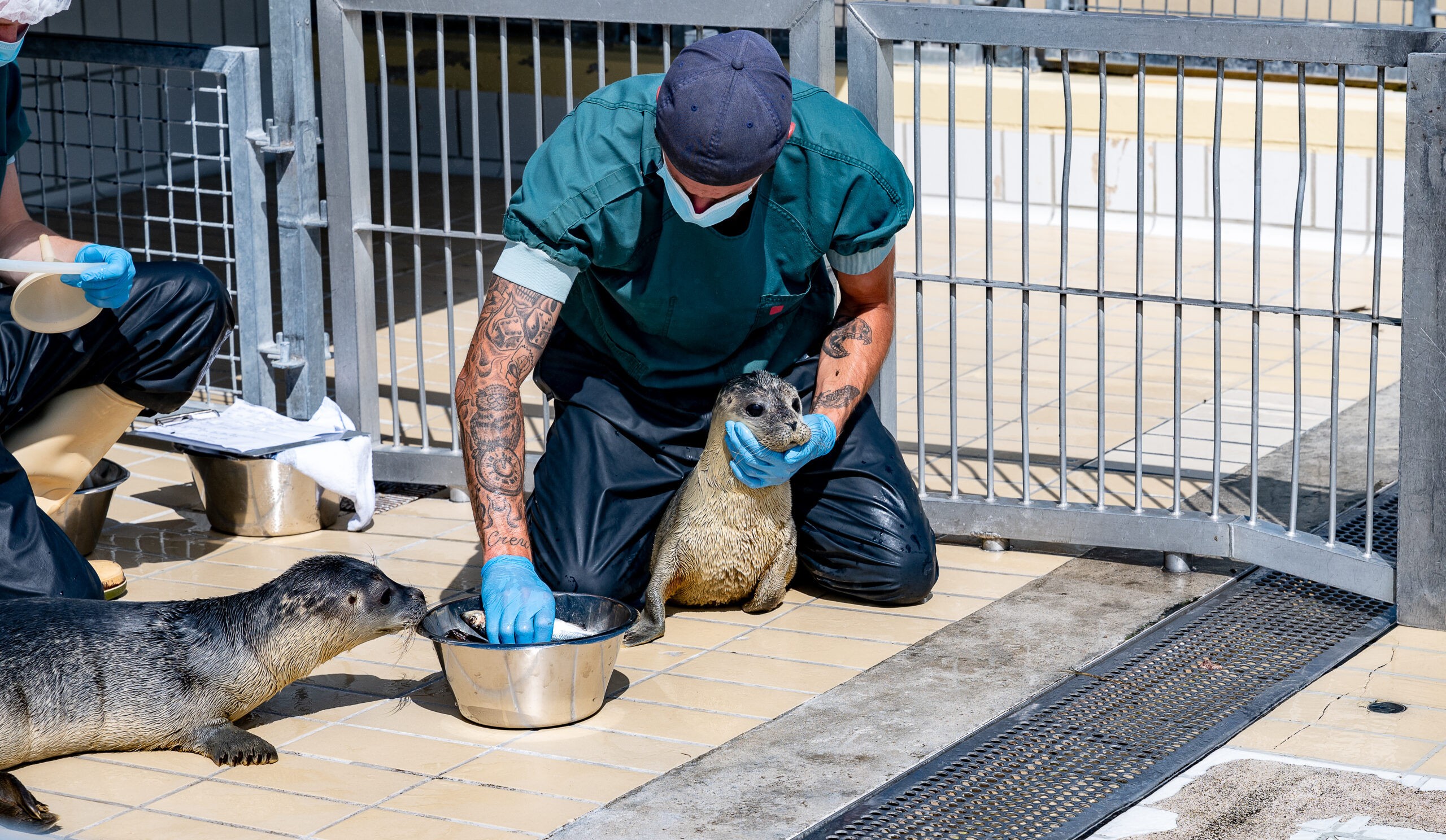 We have been taking care of seals for more than 50 years. Our work started because things were going very badly with the seals in the Netherlands. Now, the species are doing better. Today, we mainly work to keep it that way. That is why we do much more than rehabilitate seals. We provide information, educate future generations, conduct research and you can also find us on the beaches to prevent seals from getting into trouble.

How it all started

Around 1968 they picked up to twelve seals per summer in their backyard. Twelve may not sound like much, but if you consider that there were only a few hundred wild seals left at the time, that is quite a large number! When the mother of the Wentzel family passed away, they could no longer care for seals. The work was taken over by Lenie ’t Hart. As she lived in Pieterburen, the shelter continued there. She started with a dug-in basin in her backyard. And we are still there now!

In the first years, Pieterburen mainly received orphaned common seal . But also seals that were very weakened because the water was very polluted. All kinds of toxins were then 'normally' discharged into rivers and ended up in the sea. Many seals became seriously ill.

So sick that the population got smaller and smaller. And that was after they were not allowed to be hunted, since 1963. Even then, our work was about drawing attention to the habitat of the seals. The Sealcentre played an important role in reducing this pollution and better protecting the Wadden Sea. We did this together with other nature organisations, such as the Wadden Association.

In the autumn of 1988, hundreds of seals suddenly died around the island of Anholt in Denmark. Seals followed like a wave in Germany and then the Netherlands. Half of all seals in the Wadden Sea died from a disease that nobody knew about. In the end, it was virologist Ab Osterhaus who - with the help of the Sealcentre, discovered that it was a new virus. He called the virus “Phocine Distemper Virus (PDV)”, also known as "seal virus".

In 2002, the virus struck again and half of all seals died. More than 2200 dead seals were examined with the help of the Sealcentre. The study looked at what the virus did to seals' bodies, which animals were most affected by it and whether they were suffering from anything else. Ultimately, this has become a very important source of information about seals in the Netherlands.

The virus outbreak made us internationally known. Conducting scientific research in particular, rose international interest. Since then, the help of the Sealcentre has also been called in for stranded seals in other countries. From Greece to Mauritania and from Scotland to Iran.

In addition, hundreds of international volunteers have been trained over the years and dozens of master's studies and a total of seven doctoral studies have been completed.

Tissue samples, like bits of hair or blood, are taken from every seal that is brought in rehabilitation. Research can still be done to see how the seals in the Netherlands are doing.

The seal hospital of Europe

Partly due to the virus outbreak, the working methods were also revised and quite tightened up. High-quality care protocols and special treatment methods for seals were implemented in our hospital. For example, we have our own seal anesthesia team, an operating room and our own veterinary laboratory. Nowhere else the care for seals is professionalized. We're pretty proud of that!

Prevention is better than cure

At the same time, we firmly believe that the best place for seals is a healthy sea. If a seal really can't look after itself, only then will we take it in. But what is becoming increasingly important is the prevention of these problems. That's why we're conducting research to their behavior in the wild, to better understand what they need and we're committed to prevention..

In addition, our focus is on information and education. Almost all problems for seals are caused by people and therefore people can do something about it. Think of less waste in the sea, so that seals do not become entangled. Or stay calm near seals, so that the pups are not chased away. We aim to create awareness that the seal is the largest predator in the Netherlands.

We provide information and education in many ways. For example, through films on board of the ferries to the islands. Here we explain what people should do if they encounter a seal. Or our seal guards who talk to passers-by on the beach. We have a wide reach through our social media channels. And of course our entire visitor centre is designed for this! A passionate team is here every day to teach visitors everything about the importance of a healthy seal in a healthy sea.

The seal as an indicator of the Wadden Sea

We have achieved a lot for the seals in 50 years. Thanks to our work, we know so much more about the life in the Wadden Sea. Seals are at the top of the food chain in the Wadden Sea. That makes this animal one of the indicators of the area.

We see the Wadden Sea as an indicator for the entire ecosystem of which we, as humans are also a part. Of course we want it to go well with that. That is why it is important to improve our own connection with the Wadden area in the future. That will be the next step for us. Are you coming with us??