Seals belong to the order Carnivora. This is a special group of animals within the class Mammalia (mammals). Carnivora are mammals that are specialized in eating other animals, better known as carnivores.

When scientists study the evolution of certain species, it helps to divide them into categories. This categorization is called classification or taxonomy. For example, the scientific classification of the common seal (Phoca vitulina) is this:

Ancestors of the Carnivora

Millions of years ago, dinosaurs were the dominant animals on Earth. During that time there were mammals, but their fossil records showed that they were the size of tiny shrews. They specialized in living nocturnal lives, a feature that mammals still have to this day.

The first mammals ate insects in order to survive. After the massive extinction of the dinosaurs there was room for mammals to expand and evolve. This resulted in various mammals with all kinds of specializations. This gave rise to the specialization of eating meat; the birth of the order Carnivora.

The oldest Carnivora fossils that have been found are from the Miacis congnitus. These predators somewhat resembled modern civets with their long, agile bodies and long tails. Miacis most likely lived in trees and ate small invertebrates, reptiles and birds. They lived during the late Paleocene and early Eocene epoch (62 – 34 million years ago). All modern Carnivora descend from these prehistoric animals, including seals.

Do you want to learn more about the evolution of the seal family? Check out our page on the evolutionary history of the Phocidae.

How do you recognize Carnivora?

All the Carnivora are mammals (Mammalia). This means that they nourish their offspring with milk.

All Carnivora are 'viviparous’. This means that they develop their offspring in the placenta inside the uterus of their mother and give birth to "living” young.

Carnivora have a relatively large skull with a large cranium. They have large brains and are considered to be intelligent animals. In general Carnivora have somewhat rounder heads than other mammals. These rounder heads ensure that their eyes are well positioned for hunting other animals.

Position of the eyes

The shape and position of their eyes are striking. Carnivora have relatively large eyes that are close together. Because both their eyes face forward, Carnivora such as seals have a very good depth perception. This is extremely important for carnivores. After all, in order to hunt other animals they must be able to see exactly how far away their prey is.

But the easiest way to recognize Carnivora is by their teeth. Because Carnivora eat meat, their teeth have been adapted to killing and eating animals. They have large, pointed canine teeth and sharp, serrated molars. This helps carnivores to cut muscles and tendons and even crack bones. 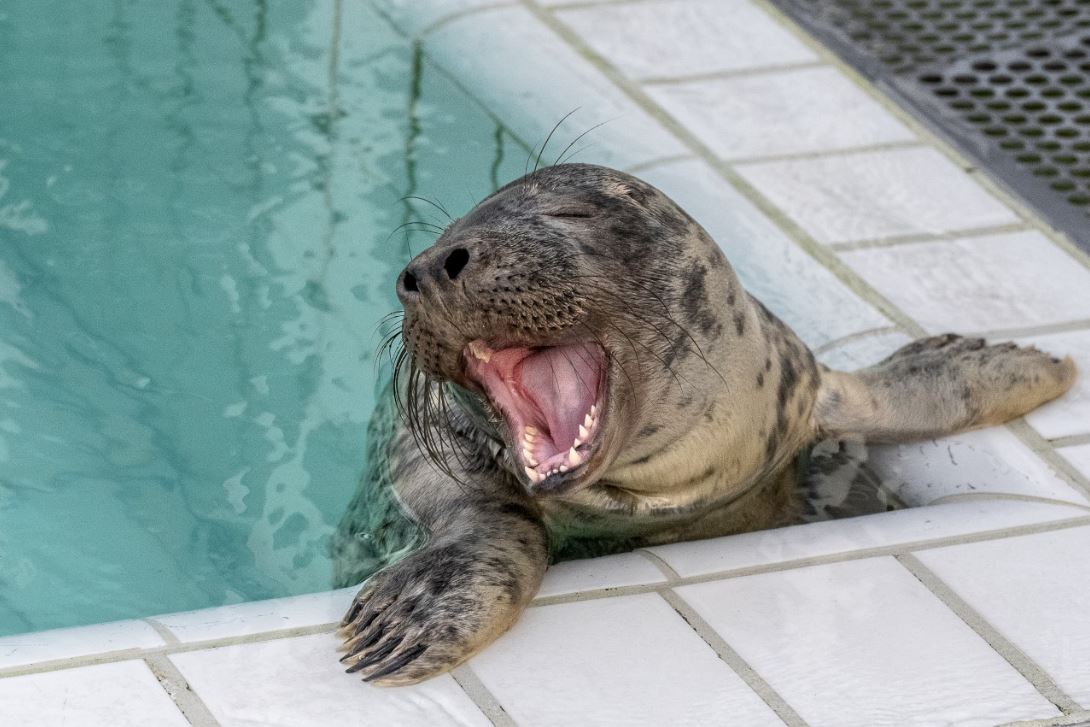 That Carnivora does not have the same meaning as carnivores?

Thes two words can be confusing, because they seem very similar. They do not have the same definition.

The Carnivora are an order of mammals that are adapted to eating meat. To survive, they must kill animals or find carcasses. When talking about Carnivora we are talking about the classification of carnivores in relation to other mammals. Examples are wolves, lions and seals.

But these mammals are not the only animals that eat meat. If an animal's diet consists mainly of meat, we are talking about a carnivore diet. Birds of prey, crocodiles, Tyrannosaurus rex and seals are therefore all carnivores.

How can you live on meat alone?

To eat and digest high-fiber plants (such as grass) you need an extremely long and complex digestive system. This is because plants are very difficult to digest and that take a lot of time. They also have very few nutrients, therefore herbivores are almost constantly eating.

Meat, on the other hand, is easier to digest. Carnivora therefore have very short, simple digestive systems. Meat is also very rich in energy and protein, so they can spend less time eating compared to herbivores.

But depending on energy alone is not enough to survive. As you may know, animals also need vitamins, fats and minerals. Therefore, Carnivora not only eat the meat from their prey, but also their organs, fat, skin and sometimes even their bones. It contains all the nutrients an animal could wish for. Seals, for example, swallow many of their prey whole. Skeleton and everything else.

That the seal is the largest predator of the Netherlands?

Do Carnivora only eat meat?

Not always. There are species that eat almost exclusively meat, but there are also Carnivora with a mixed diet. Yet we still call them carnivores, because their bodies are mainly specialized in eating and digesting meat.

There are also Carnivora with a mixed diet. If they consume meat for less than 30 percent of their diet, we call them hypocarnivores. They often eat mushrooms and fruit in addition to meat. These contain little fiber and a lot of sugars and proteins, so they are quite easy to digest for Carnivora. Brown bears (Ursus arctos) are known hypocarnivores. For their hibernation they have to build up a lot of reserves. That is the reason why they eat everything they come across.

In between the hyper- and hypocarnivores you have so-called mesocarnivores. Their diet consists of 50-70 percent meat. Many canids are mesocarnivores. They mainly eat meat, but they can also digest certain plants as long as they don't contain too much fiber.

The giant panda (Ailuropoda melanoleuca) is a bear species from the order Carnivora that eats almost exclusively high-fiber bamboo? If you look closely at the teeth of a giant panda, you will see that the serrated molars are a lot flatter than those of other Carnivora. This helps the panda to crush these woody plants.

Families in the order Carnivora

Within the order Carnivora there are 16 families and 296 species. The families are divided into two suborders : the Caniformia and the Feliformia.

That the largest species within the order of Carnivora is the southern elephant seal (Mirounga leonina)? These seals can be more than 6 meters long and weigh 3,700 kilos!