Did you know that seals were hunted in the Netherlands*? Seals have been killed for their fur and meat for centuries, but there came a time when bounties were even paid for simply killing these animals. We can hardly imagine it anymore, but it was only after 1962 that seal hunting was officially banned and the seals were given a protected status. On this page you can read more about the history of seals in the Netherlands and how our image of the seal has changed over the centuries.

*Most of this history is about the common seal. The grey seal probably hadn't been seen in the Netherlands for centuries - until their return in the 1980s.

The seal as a source of food

Until the Middle Ages, people caught seals in the Netherlands for their meat. They actually ate seal meat! You could buy the seals at the fish market. The paintings by Frans Snijders from the 17th century give you an idea of what such a fish market may have looked like at that time. In the 16th century, the need to eat seal meat disappeared, although people still occasionally ate the liver.

Three paintings by Frans Snijders about the fish market, from the 17th century. Can you find the seal(s) in each painting?

The seal as a fish thief

There was a turnaround at the end of the 16th century. Fishermen in Zeeland were of the opinion that seals were their competitor, because according to them seals ate too much fish. To protect the fisheries, Zeeland was the first to start paying a premium in 1591 if you killed a seal. The distribution of the premiums was tracked. For example, this documentation shows that more than 40,000 seal premiums were paid between 1591 and 1801!

Everyone was free to earn money by catching a seal. In Zeeland, there were specialized seal hunters. But if you happened to encounter seals in the rivers or along the coast as a fisherman, you could also hunt them (see image 2). Even islanders from Schiermonnikoog came all the way to Zeeland to hunt for seals. Zeeland finally stopped the seal premiums in 1857.

Print of seals and turbot fishing by Adriaen Collaert from 1582. On the left of the print you see how two seals are caught. Source.

Seal hunting in other provinces

In 1610, Holland (nowadays North and South Holland) started with a premium to combat seals. Bounty hunting was considerably smaller: in South Holland, 40 seals were caught in the 12 years that the seal premium existed.

Seal hunting also existed in both Friesland and Groningen. No premiums were paid for it. Seal hunters used to live in Westernieland, a village close to Pieterburen. Documentation showed that between 1859 and 1899 they caught between 100 and 250 seals per year.

In 1900, a national seal bounty started. The cause was again due to complaints from the fishing industry. Fishermen saw the seal as a common tern and destroyer of their fishing nets, although the exact damage caused by seals to the fishery had not been investigated. Despite the lack of evidence, the national seal bounty went ahead anyway. For example, the government gave you 3 florins for a killed female seal and 2.50 florins for a killed male seal.

The image that people had of seals and the seal hunt eventually came under discussion during this period. At the end of 1920, the opposing voices became somewhat louder. Some people did not think it wise to spend state money on seal hunting during the general depression.

Other insights also emerged about nature and that animals can also have an indirect use. Even "harmful" animals - as was thought of the seal - have their role in nature. Nature and animal protection became increasingly important and the method of killing seals also received criticism.

However, this still had little impact on daily practice. Only the gruesome hunting with pens stopped on Terschelling. This form of hunting went as follows: a beam with sharp pins was placed at the tide line. Seals were frightened from a sandbar and fled into the water. There, they got into the pens and were injured. Hunting with a rifle and bat was still allowed (see image 3).

Image of children clubbing a seal from an early 20th century school book. Photo of pleasure hunters with their shot seals. Source: Seal hunt in the Netherlands 1591-1962

Despite the criticism, bounty payments continued uninterrupted. In the period from 1900 to 1942 (with a stop for a number of years), between 800 and 1600 seals were killed per year. Seal hunting was abolished by the German occupiers in 1942, but resumed after World War II. In 1954, a new hunting law was even introduced in which all existing rules regarding hunting were canceled: the hunting season applied both throughout the year and throughout the country.

Just as people used to heat whale blubber to make whale oil, this used to be done with seals. By heating the fat layer of a seal, a tear was created that people could use in different ways. After the Second World War, the demand for tear quickly declined again. Petroleum then became increasingly popular and took the place of seal tear.

Sealant was used for:

The seal as a fashion trend

Before World War II, hunters shot young and older seals. This changed after the war. Back then, young seals were mainly hunted. The fur industry paid much better for a seal than the government did. According to Groninger Hendrik Teerling from the documentary Other Times you got 30 to 45 guilders for the fur of a young seal. People started to hunt seals for the fur industry.

Seal fur was fashionable. The sealskin has been used for clothing and shoes for centuries. But the demand for seal fur grew when the Groningen fur trader Van Daal & Meijer (1938 – 1973) came into the picture. The big breakthrough came after the war: the company had devised a processing process in which the seal skins did not become stiff, but remained flexible and soft. This lead made them one of the largest seal fur traders in the world. 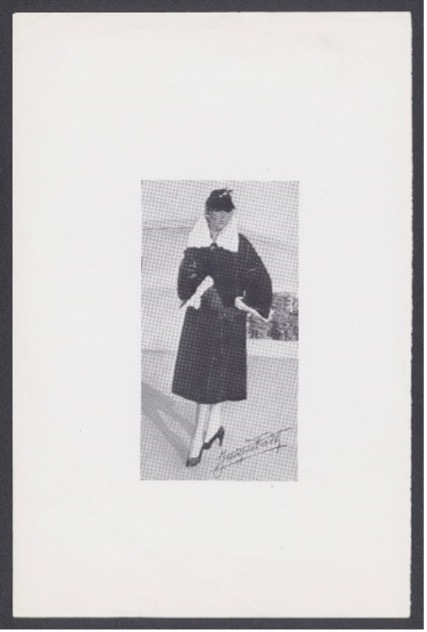 The supply of sealskin from the Netherlands was not enough. Van Daal & Meijer expanded into seal hunting in Canada, Greenland and Iceland (see figure 5). There they hunted the hooded seal and the harp seal. After the seal hunting ban in the Netherlands after 1962, they continued to hunt seals abroad until the 1970s. 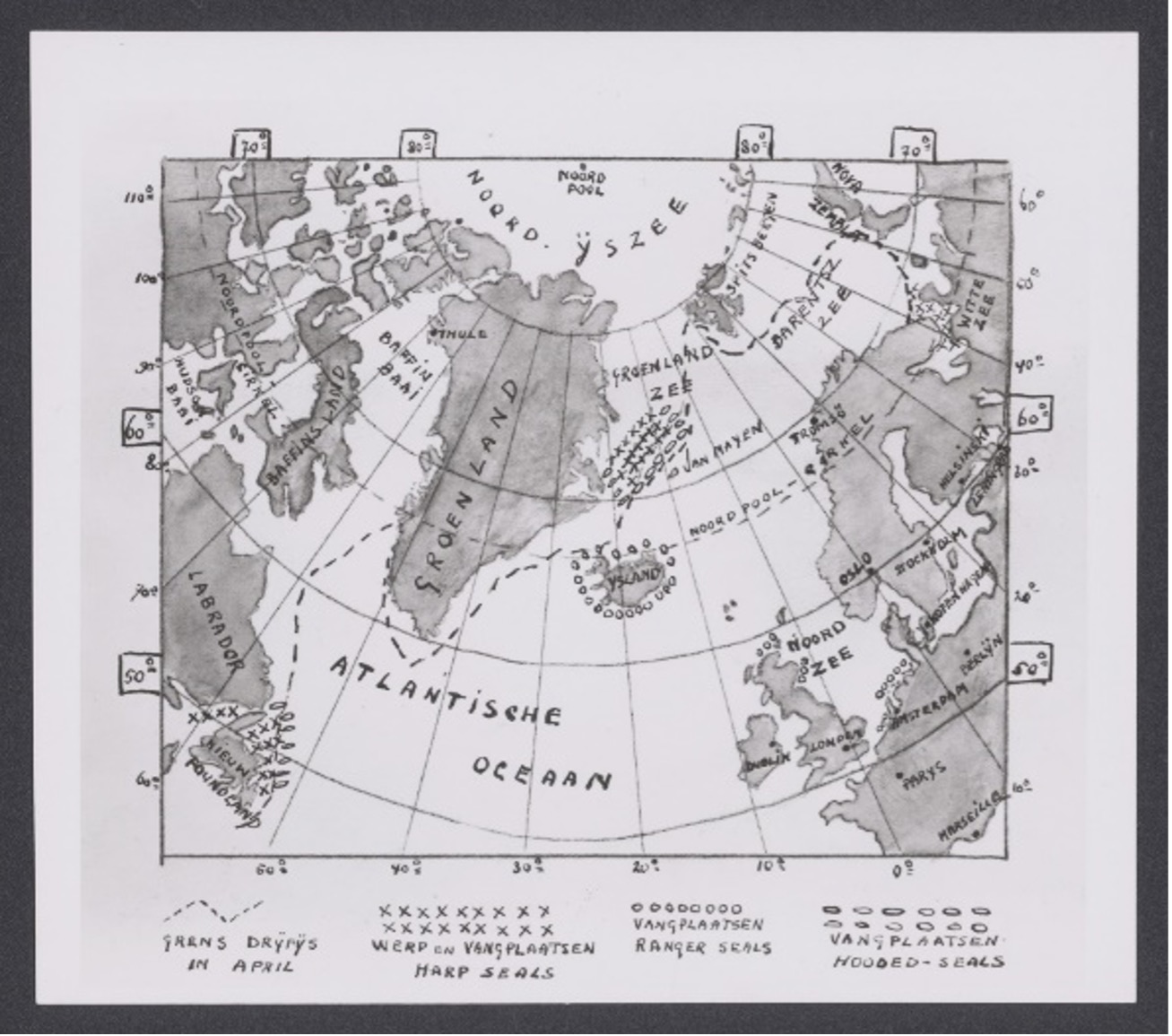 The seal as a protected species

People started to work to help the seal. Before the seal hunt stopped, seal rehabilitation had already started. Gerrit de Haan and Annie de Haan-Langeveld were the pioneers and were the first in Europe to set up a seal rehabilitation center (see video). This started in 1952 on the Wadden Island of Texel at the Texel Museum, which is now called Ecomare . 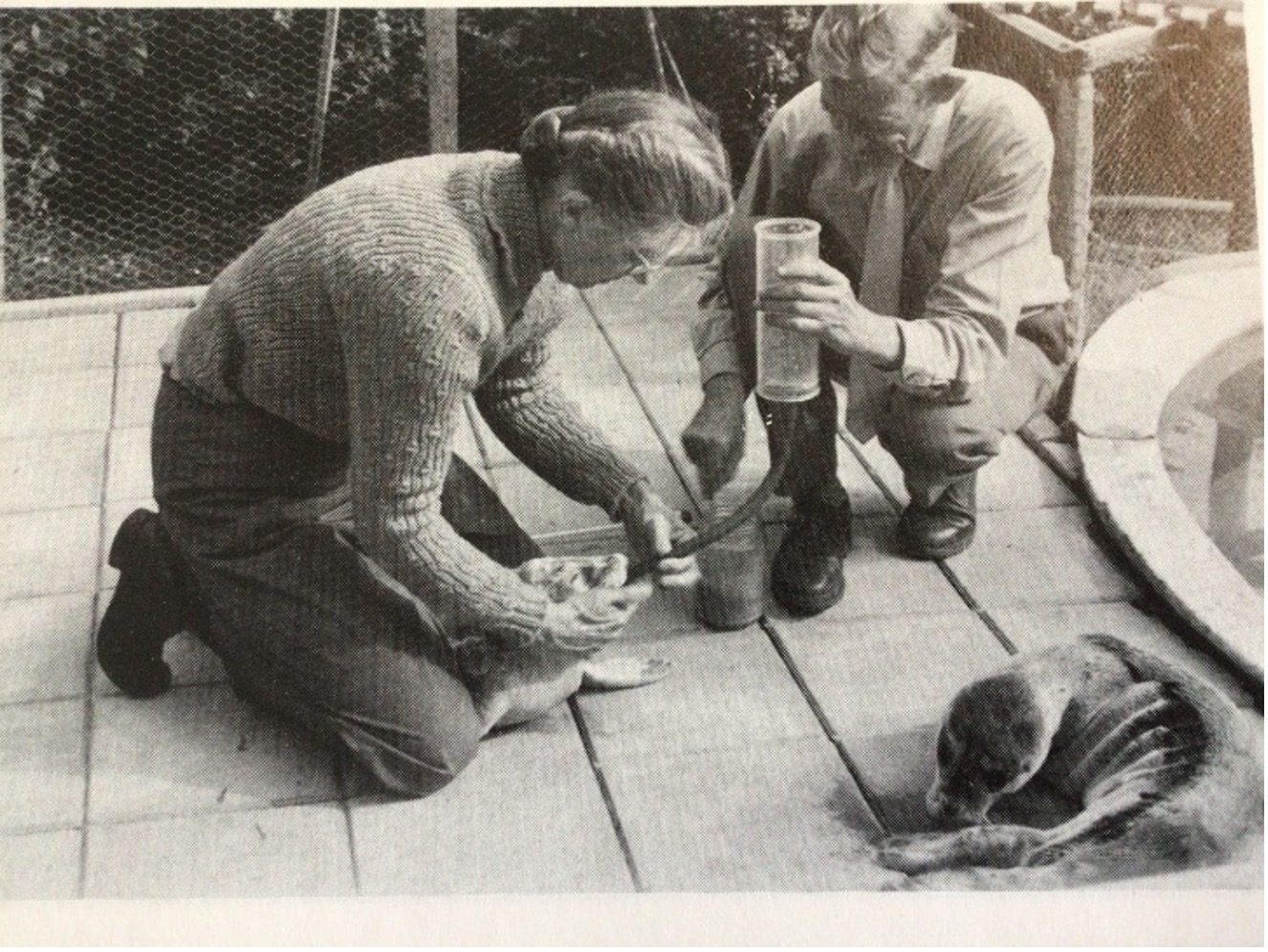 René and Anneke Wentzel in their backyard where they rescued seals in Uithuizen. Source: Peter Wentzel.

Things went badly for the seals

Things went very badly for the seals when the seal rehabilitation centers on Texel and Uithuizen started. This can be clearly seen with a graph of the counts of seals in the Dutch Wadden Sea. From the year 1900 it can be seen that the number of seals has decreased enormously: from about 15,000 seals to about 2,000 seals in 1960. The fact that the seals were doing so badly was taken seriously by the government in the 1960s. In the end, the government decided to ban seal hunting in the whole of the Netherlands after 1962. 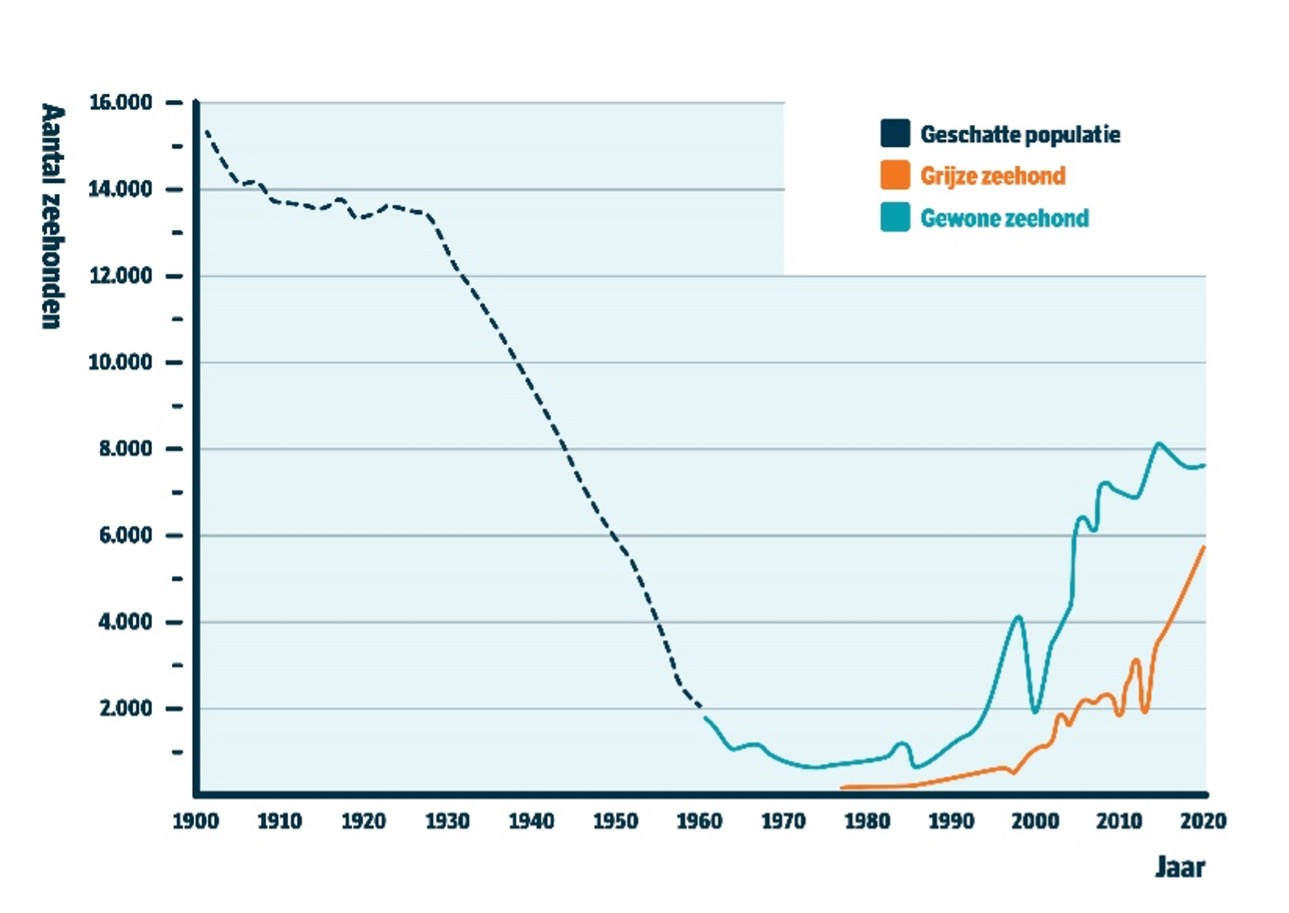 The number of seals in the Wadden Sea remained low. The seawater was seriously polluted and commercial shipping and water tourism caused a lot of disruption. The harmful substances PCBs in the water in particular had a negative influence on the reproduction of the seals.

After an outbreak of a virus in which half of the seals died in 1988 and in 2002, seals were given the opportunity to grow in numbers again – and they succeeded. There was more good news: grey seal re-established itself in the Wadden Sea in the 1980s. Conclusion: the seal has made a comeback!

The relationship between humans and seals has changed a lot over the past few centuries. It's actually amazing how differently we thought about seals compared to now. By changing our image of the seal and by committing ourselves to its protection, we as people ensured that we did not lose the seal in the Netherlands. One thing is clear from a look at history: we must ensure that the seals have a future. We will therefore continue to work for a healthy seal in a healthy sea. Day in day out. Are you in?