Have you ever seen a black seal? That would be very special because black coloured seals are quite rare. These seals have melanismwhich makes them completely black from head to toe. In this article you can read all about what melanism is and learn what a melanistic seal looks like.

The amount of melanin you naturally have can vary per person/animal, but it is quite unique to produce both an excess of melanin (melanism) and no melanin at all (albinism).

Black seals in the Netherlands

Curious what a melanistic seal looks like? Then watch the short video below of seal Pepper at our Sealcentre:

It is almost never the case that you see a completely black seal. It is difficult to say exactly how little melanism occurs in the seals in the sea. We have only seen melanism in grey seals, not in common seals (yet). 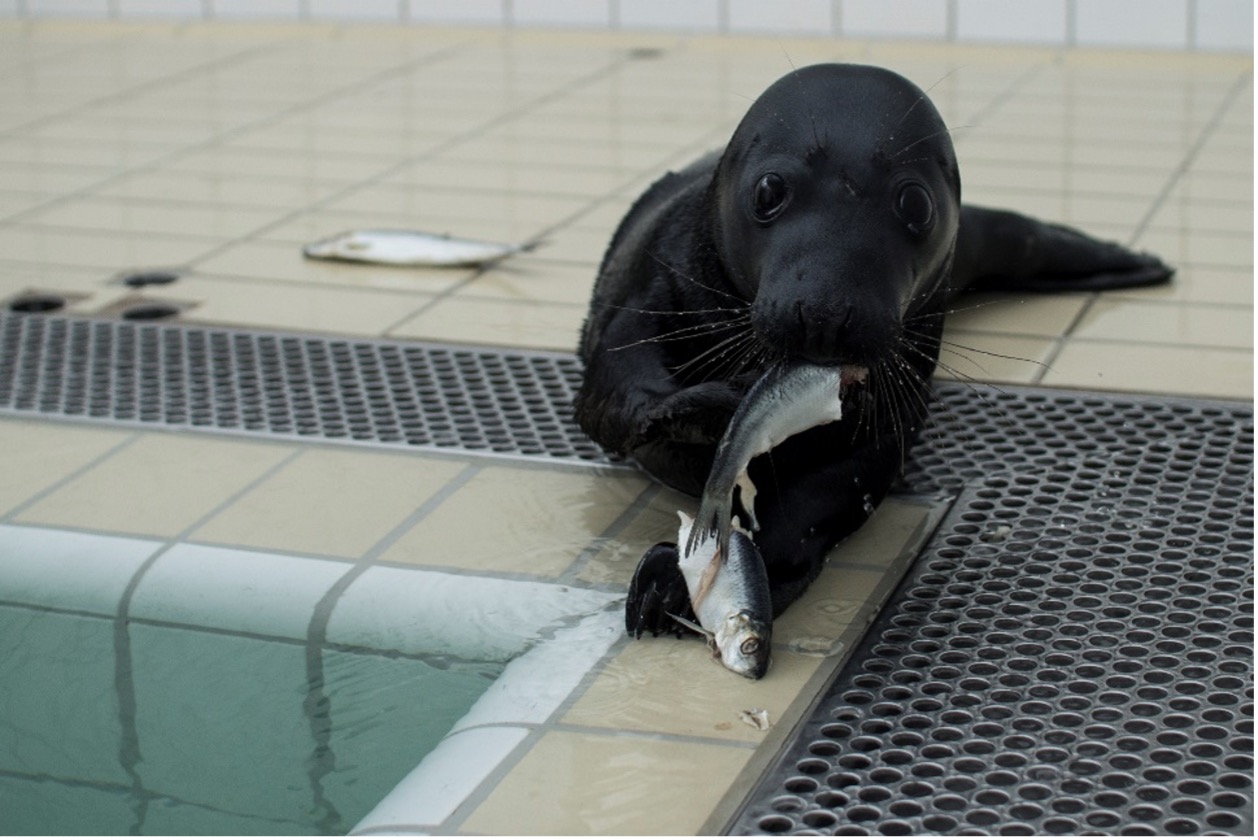 Melanism in other animals

Melanism does not only occur in seals. There are also melanistic foxes, chickens, frogs, guinea pigs and house cats. A very well-known example of a melanistic animal is the black panther.

The black panther is not a separate animal species, but is a collective name for all melanistic felines?

In most cases, the completely black animals are in the minority in felines, but in the feline jaguarundi about 80 percent are melanistic animals [1].

Melanism can be beneficial and/or disadvantageous for animal species and individual. For scientists, melanism is an interesting topic. If animals can differ in appearance, does black fur have certain advantages or disadvantages? It often happens that the colour and/or pattern of the coat matches the colours of the environment.

Think, for example, of a seal pup with a white coat lying on the ice in the North Pole. This way he is less noticeable to predators who would love to eat the pup. On the other hand, it also works to their advantage for predators. A polar bear is colored white for the same reason, so that seals are less likely to see it coming when it goes to hunt them. If you have the color of your environment, it works like a protective color: you stand out less which increases your chance of survival.

For that reason, melanism should not occur in the North Pole. According to this theory, black animals would stand out in such a snow-white environment. The result: they are eaten earlier and therefore even rarer. The fewer black animals there are, the less likely they are to reproduce and pass on their genes that provide the black coat.

Melanistic advantage in the Netherlands

For a seal in the Netherlands, a black fur has no advantage or disadvantage in any case. This is because the seal is at the very top of the Wadden Sea food chain. That is so because there is no other animal that eats the seal.

Animals can change colour when their environment changes? A special and well-known example of this is the pepper-and-salt butterfly [2].

Adapt to the environment

The name says it all: the pepper-and-salt butterfly was white with black. But in the 19th century (1800-1899) completely black specimens of this species suddenly appeared in England. These black butterflies are very noticeable when they were on a light tree trunk. Why did more black butterflies appear at that time if that seems to be a disadvantage?

In this century, the Industrial Revolution was in full swing. Due to the large spread of factories and machines, there was a lot of air pollution. The black soot in the air precipitated, turning buildings and trees black. Suddenly you didn't stand out as a black butterfly. In cities, the ratio turned around. Black butterflies of the pepper-and-salt butterfly were mainly found there, while the light variant occurred in nature reserves.

Depending on various factors, such as your environment, melanism can therefore work in your favor! Can you think of in which nature reserves a black seal has an advantage compared to a grey seal?