Sound of a seal

Grey seals and Common seals are apparently part of a very specific group of animals. Animals that, just like humans, have the ability to develop their voice over the course of their life. This phenomenon is called ‘vocal learning’. Other animals that possess this ability are parrots, passerine birds, and bats. An extraordinary example of vocal learning in seals is a seal called Hoover, who was kept in Boston’s New England Aquarium. Hoover was raised by humans and learned to copy human speech. Andrea Ravignani did his postdoctoral research at the Sealcentre and investigated the ‘crying’ of seal pups.

Read more about his research group. 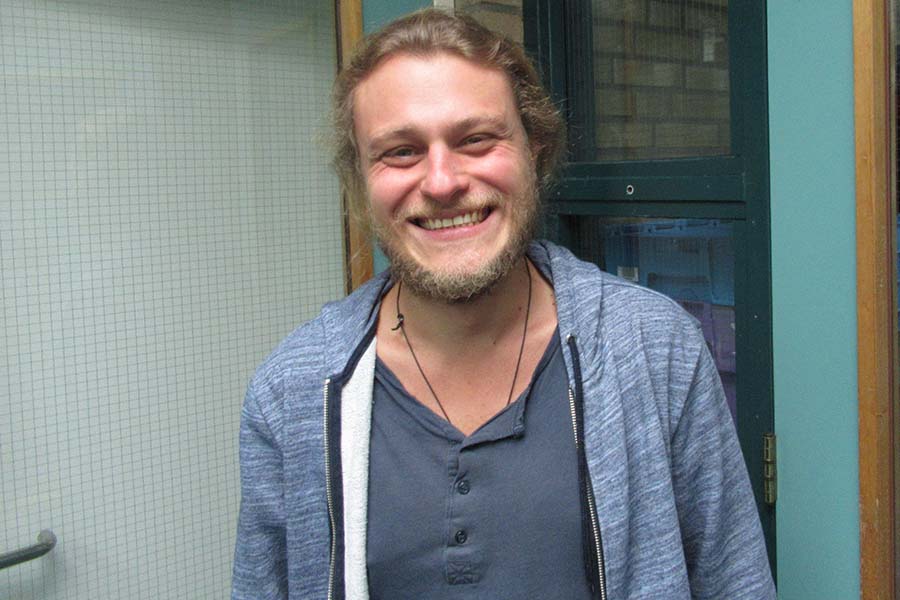 Why do people talk? And why do seal pups cry?

Andrea Ravignani is doing postdoctoral research at Sealcentre Pieterburen that is funded by the prestigious Marie Curie Scholarship. Andrea is an Italian scientist who is fascinated by the question of how animals – and humans – learn to produce sounds. As a part of his research in Pieterburen, he records the sounds of seal pups every day; the so-called ‘crying’. Andrea uses these recordings to then see if there is a development in the production of these sounds.

Have you ever noticed how babies (human pups) begin with crying, then transition to incoherent babbling, and how this slowly changes into language? Something similar happens in seals. The sound – or voice – of each seal is very different, and their voices also change as they age. In fact, it looks like Grey and Common seals are members of a special group of animals that, like humans, have the ability to shape their voices over the course of their lives. This ability is called ‘vocal learning’. Other animals that have this ability are parrots, passerine birds and bats.

An exceptional example of this ability in seals is the aforementioned seal named Hoover. Hoover was an orphaned pup who was taken in and raised by humans in Boston. Before he was relocated to the New England Aquarium, he had learned to mimic human speech. Hearing Hoover speak his former owner’s catchphrases is truly bizarre. You can hear how he sounds in the YouTube video “Hoover the Talking Seal”. Seals learn to make sounds through imitation, which they then adapt and change into their very own voice. Because of that, they might be the animal closest to us humans when it comes to ‘vocal learning’.

Andrea’s research is important for two reasons. On the one hand it helps us to gain a better understanding of seals and what is important for them in the first phases of their life. On the other hand it gives us a glimpse into the evolution of humans. Human evolution is very difficult to reconstruct without a time machine, especially when it comes to the evolution of speech and language. Communication in seals is a completely new field of study.

In December 2018, Dr Andrea Ravignani published his discovery that seal pups adjust their communication based on the sounds of other pups. A sense of rhythm and timing had never before been demonstrated in seals. His work gives an insight into the vocal communication of humans, as well as seals.

Research conducted by Dr Andrea Ravignani from the Artificial Intelligence Lab of the Vrije Universiteit Brussel at Sealcentre Pieterburen was the first to show that seal pups exhibit complex communication behaviour. He observed that seal pups adjust their sounds and especially their rhythm to what another pup is doing. Said simply: they take turns making sounds. However simple this may seem, it has never before been demonstrated in seals and it characterises animals that use complex communication methods. The study will be published in the Journal of Comparative Psychology.

Ravignani: “Us humans often consider our communication to far more complex than that of other animals. However, what we are seeing in seal pups is astonishing. Even at four weeks old, seals seem to demonstrate a very precise and flexible timing in their communication. To an extent this is very comparable to the alternation we see in human conversations or in a musical canon.”

The discovery fits in well with a study conducted by the Sealcentre into the behaviour of mothers and pups in the wild, which showed that pups suckle with several different mothers. It is therefore important that pups stand out between their peers and adjust their calls.

Ravignani: “This finding was relatively unexpected and even seems counterintuitive at first. Communication in Common seals is usually relatively vertical – between mother and pup, not between different pups. However, what we see here is horizontal communication: the rhythm of one pup determines the rhythm of another pup. While this is surprising within the established knowledge of mother-pup interactions in Common seals, my findings fit very well in the behavioural research that the Sealcentre is conducting with the University of Groningen.”

The study is part of a two-year research programme that Ravignani is conducting with the support of the Marie Curie Scholarship.

October 2021 - Seals and the evolution of human speech

Seals are good at learning sounds. The 'talking seal' Hoover could even imitate human speech. But can young seals already adapt their sounds to the environment? Researchers from the Max Planck Institute for Psycholinguistics, the Vrije Universiteit Brussel and the Pieterburen Seal Centre studied seal pups a few weeks old. When the seal pups heard louder ambient sounds, they themselves called out with a lower pitch. This makes seals very suitable for research into the evolution of human speech.

The seal Hoover had been taken in as a pup by an American family. Even after he had already been moved to an aquarium, he continued to mimic human speech: he barked at visitors in his gruff voice (“Come over here”). Seals therefore belong to the small group of mammals that can learn to imitate sounds, also called 'vocal learning'.

It is even more special if animals can adjust the pitch of their voices: an important feature of human speech. Senior researcher Andrea Ravignani says: "By studying these extraordinary mammals, we hope to eventually better understand how humans evolved speech and why we ourselves are such a talkative species." What Ravignani and his colleagues particularly wanted to know: could seals adjust their pitch from an early age?

Sounds of the Wadden Sea

The researchers decided to study eight seal pups from 1 to 3 weeks old. The seals were already staying at seal centre Pieterburen to gain strength. After 2-3 months in the sanctuary, they were released into the wild. To investigate whether the seal pups could adapt their sounds to ambient noise, the biologists first made recordings of natural ambient sounds of the Wadden Sea. These sounds were played in the seals' enclosure for a few days, at three different sound levels (from no sound to 65 dB). The pitch of the ambient sounds was similar to that of the seal sounds. The researchers also made recordings of the seal sounds. Would the pups adapt to the ambient noise and call higher or lower?

When ambient sounds were louder, the seals called with a lower pitch. At the loudest sounds, their pitch also remained the most stable. One seal also clearly showed the 'Lombard' effect: it started calling louder when ambient sounds were louder. This effect is also typical of human speech: people start talking louder when there is ambient noise, so they can be better understood. But the seals did not call out more often or longer at different noise levels.

So even very young seals can already adapt their sounds to the environment by calling at a different pitch. That ability they share with humans and bats is unusual for a mammal. Other animals only call louder in similar experiments.

"The seal pups have much better control over their vocalisations than we thought,", says Ravignani "And they already have control over their voice when they are only a few weeks old. That is unique in the animal world. We thought only humans had a direct connection between the cerebral cortex and the larynx. But seals therefore seem to have these connections too. That brings us another step closer to unravelling the mystery of human speech."

Veterinarian and researcher at seal centre Pieterburen Anna Salazar Casals added: "As a rehabilitation centre, we are happy to collaborate on research, in order to understand the animals better and protect them even better. We can use these new insights, for example, when setting up new shelter facilities or determining what resting areas in the wild should comply with."

Seals are good at learning sounds. The 'talking seal' Hoover could even imitate human speech. But can young seals already adapt their sounds to the environment? Researchers from the Max Planck Institute for Psycholinguistics, the Vrije Universiteit Brussel and the Pieterburen Seal Centre studied seal pups a few weeks old. When the seal pups heard louder ambient sounds, they themselves called out with a lower pitch. This makes seals very suitable for research into the evolution of human speech.

Most animals make sounds that fit their body size. A larger animal will sound lower because the larynx is longer: the air-filled canal in the neck where the vocal cords are located. But seals do not always sound the way they look. Sometimes they sound lower and therefore bigger, for example to impress a rival. Or higher and thus smaller, for instance to get more attention from their mother. Are these animals good at learning sounds (vocal learning) or has their larynx adapted to be more flexible?

To answer this question, PhD student Koen de Reus and senior researcher Andrea Ravignani from the MPI worked with researchers from Sealcentre Pieterburen. The team measured the larynxes and body size (length and weight) of 68 young seals (up to 12 months old) that had died before or after a rescue attempt. The researchers also analysed previously recorded seal sounds, confirming the seal's wide range in pitch.

De Reus and Ravignani found that the length of the seal larynx matched their body size exactly. So there were no anatomical explanations for their vocal talents. According to the researchers, only the vocal learning ability of seals can explain why they do not always sound the way they look.

"Animals with vocal learning ability will sound differently than expected based on their body size, but the length of their larynx matches their body size. This combined acoustic and anatomical data can help us find more animals like this,", says de Reus "Studying multiple animal species with this ability is also going to help us find the biological basis of vocal learning. And possibly it will also provide insights into the evolution of complex communication systems such as speech.".

"The more we study seals, the more we see that they can tell us something about human speech,", Ravignani adds.