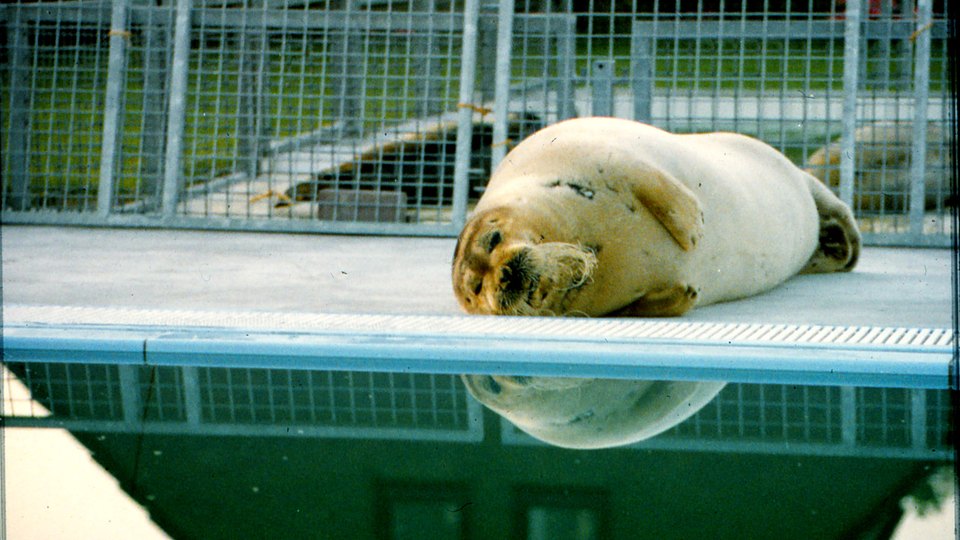 "Bearded seals get their name from their... moustache!"

External characteristics of the bearded seal

Do you know how the bearded seal got its name? Bearded seals have a bunch of thick and long whiskers. When these are dry, the ends of these whiskers curl. It looks like they have a thick moustache.

Bearded seals have a broad head that appears a bit flat when viewed from above. Their eyes are relatively small and close to eachother. They have a large, broad muzzle with the cheeks appearing to droop a little. Their nostrils are wide apart and quite large1,3.

The head is quite small in relation to their body. Bearded seals have a large, long body. Adult animals are between 2 and 2.5 meters long, with an average weight between 250 and 300 kilograms3.

The females sometimes grow a bit larger than the males. But otherwise the females and males are difficult to tell apart. They both have a gray-brown color, sometimes with a rust-colored head and flippers. Because their fingers are all the same length, bearded seals' flippers appear almost square in shape. The nails are wide and short1,2.

Did you know: If there is iron in the seabed, some seal species can develop a rust-colored coat on the head and flippers. This is quite common in bearded seals, but also the common seal (Phoca vitulina) here in the Netherlands sometimes has this!

Bearded seals are members of the family true seals (Phocidae), and belong to the subfamily of northern true seals (Phocinae). They live in the Arctic. Their remote habitat and way of life make it very difficult to conduct long-term research. As a result, little is known about their behavior.

It is estimated that there are more than 500,000 bearded seals. They are considered non-threatened, but global warming is causing significant changes in their habitat1. They depend on sea ice during mating season, so its reduction is disadvantageous to the bearded seal population. So they are not in trouble yet. But melting ice caps will mean less and less space for bearded seals to mate and nurse pups2.

Bearded seals mainly hunt benthos. Benthos is a collective name for organisms that live in and on the seabed. Their diet is varied. They eat crabs, shrimps, shellfish, squid and fish. They prey on these animals in shallower waters, usually diving around 100 meters deep. Younger, less experienced animals sometimes go a lot deeper (up to 450 meters). Bearded seals can stay underwater for 25 minutes, but most dives don't last more than 10 minutes3.3.

Behaviour of the bearded seal

Bearded seals are not very social. They prefer to spend their time alone. Females also like to be alone when they have and nurse their pups. However, it is not strange to see them lying next to each other on the ice. They prefer not to go into the water during moulting. Then they can often be found in small groups on the ice.

Bearded seals rest close to water. They do this so that they can flee quickly if necessary. So the best places to rest are along the water's edge on the pack ice, on ice floes or around breathing holes on the sea ice3.

Did you know that bearded seals prevent their favorite breathing holes from freezing? They do this by scraping the ice with their short but strong claws. 1

Little is known about this species, both about mating behaviour and about the period of birth. For example, we don't know how long the pregnancy of bearded seals lasts.

When they are between 5 and 7 years old, bearded seals become sexually mature. That means that they are adults and can therefore have pups.

Bearded seals mate in the water. Because of this, little is known about their mating behaviour. We do know that males “sing” during the mating season. They do this to attract females and to scare off other males. Their singing usually consists of sharp, whistling sounds. These start very high and then become lower in pitch3.

The pups are born between March and early May on ice floes in shallow water. The pups are around 1.30 meters at birth and then weigh an average of 35 kilos. They have dense, light gray fur and a layer of subcutaneous blubber.

Did you know that most bearded seal pups enter the water with their mother within a few hours of birth? They probably do this to avoid polar bears in the area3.

During the nursing period, the pup spends about half of the time on the ice sleeping. The rest of the time, mother and pup will be in the water together. So bearded seal pups learn to swim and dive from their mother, something most other seal species do not do3.

The milk that the pup gets from the mother is about 50 percent fat. This helps the pup gain weight quickly. The nursing period lasts between 18 and 24 days. At the end of this period, the bearded seal pup can weigh 100 kilos. So pups gain 60-70 kilos in this short time! The mother then leaves her weaner to mate2,3.

Enemies of the bearded seal

These seals are also hunted by humans. Traditional seal hunting is an important source of food, fuel and equipment for native people.

Bearded seals were also hunted commercially in Russia. Between 1950 and 1960, more than 10,000 bearded seals were killed. That has now been greatly reduced. Now only a few hundred animals are allowed to be killed each year. However, the only sources on this are from the Russian government, so it is not clear whether these numbers are correct and whether those rules are also being followed3,4.