Every year, we receive dozens of reports of entangled seals. They get trapped in litter floating around in the sea. This could be a fishing net, balloon ribbon or a frisbee. We unfortunately come across the craziest things. The waste can cause deep wounds, or worse: it can kill the seal.

Antibiotic resistance in the Wadden Sea

Trash floating around in the sea is often plastic floating around on the water or underwater. Seals (and other animals) swim through it due to their curious nature. Or they mistake it for prey and get stuck that way.

Since 2010, we have been tracking the number of reports of entangled seals. Veterinarian and researcher Anna Salazar Casals conducted research into the numbers and types of entanglements in the Netherlands. The data comes from a joint study by seal sanctuaries Zeehondencentrum Pieterburen, Aseal and Ecomare in collaboration with the Max Planck Institute. 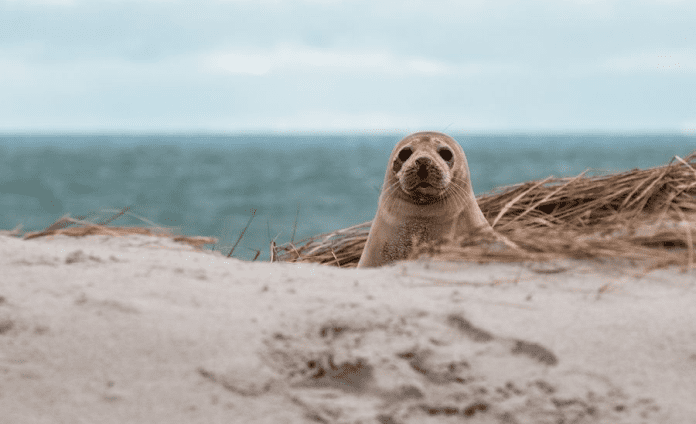 Interestingly, 88 per cent of entanglements among seals are caused by material from fishing, such as fishing nets, fishing lines and fish hooks. The remaining 12 per cent comes from other material. We have caught entangled seals at the centre that were even caught in a t-shirt or a frisbee. Type of entanglement in seals

Seals can become entangled in different ways, as the picture shows. Most of these seals are trapped with their necks. These are mainly grey seals (Halichoerus grypus). They can also swallow litter such as fish hooks - with disastrous consequences for the animal. The danger of these entanglements is the damage it causes. A fishing line can cut through the seal's skin and damage its muscles, blood vessels and organs. As long as the depth of the wound is limited to their fat layer, seals can survive an entanglement. 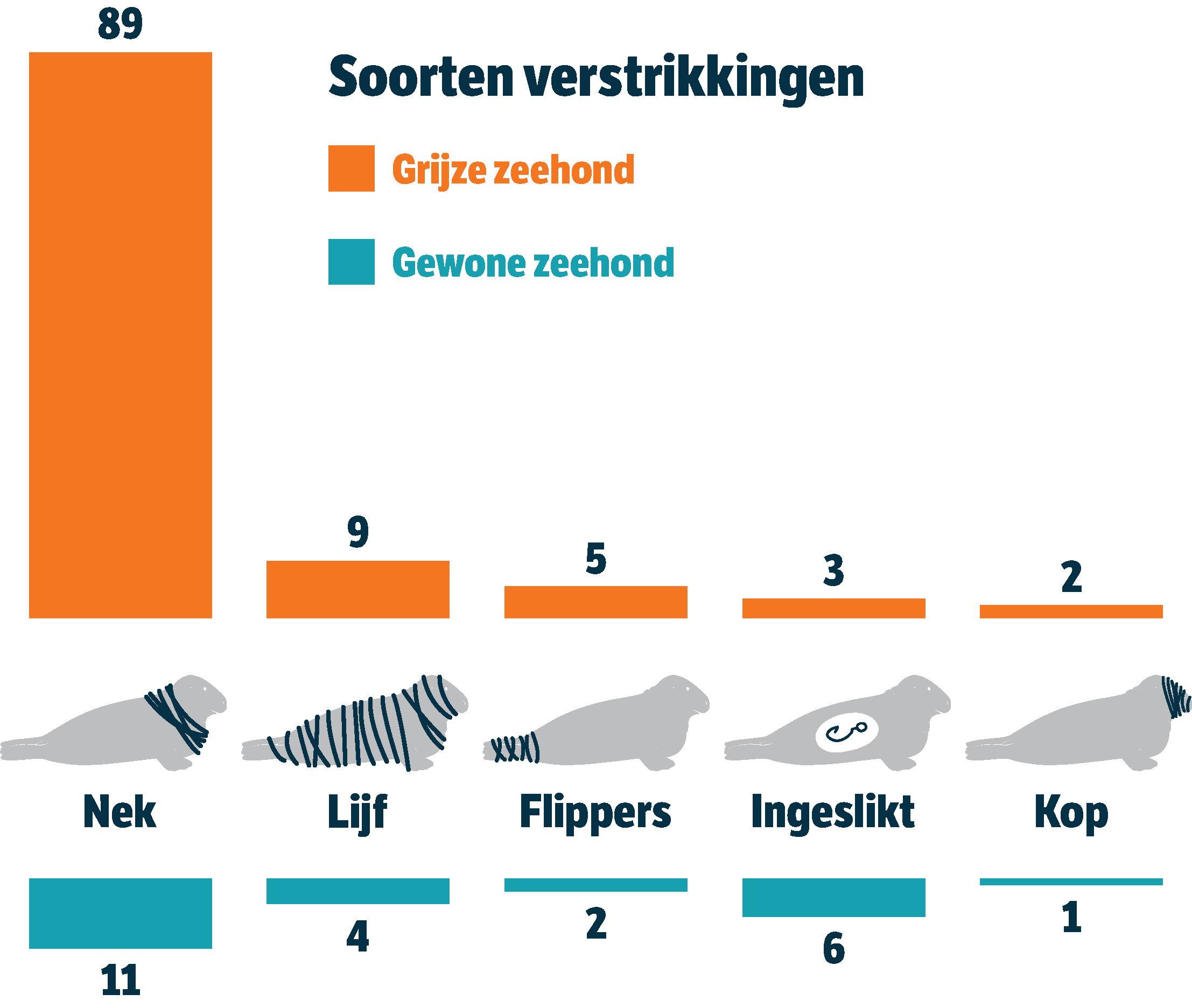 Young seals fish behind the net

The majority of entangled seals are young seals (juvenile). Due to their curiosity or playfulness, they probably put their head through plastic or rope or they want to play with it. As a result, the animal becomes so entangled that they are unable to free themselves. Because these are often young animals, they are also still growing. As a result, the entanglement gets tighter and tighter. And the wounds become much worse. 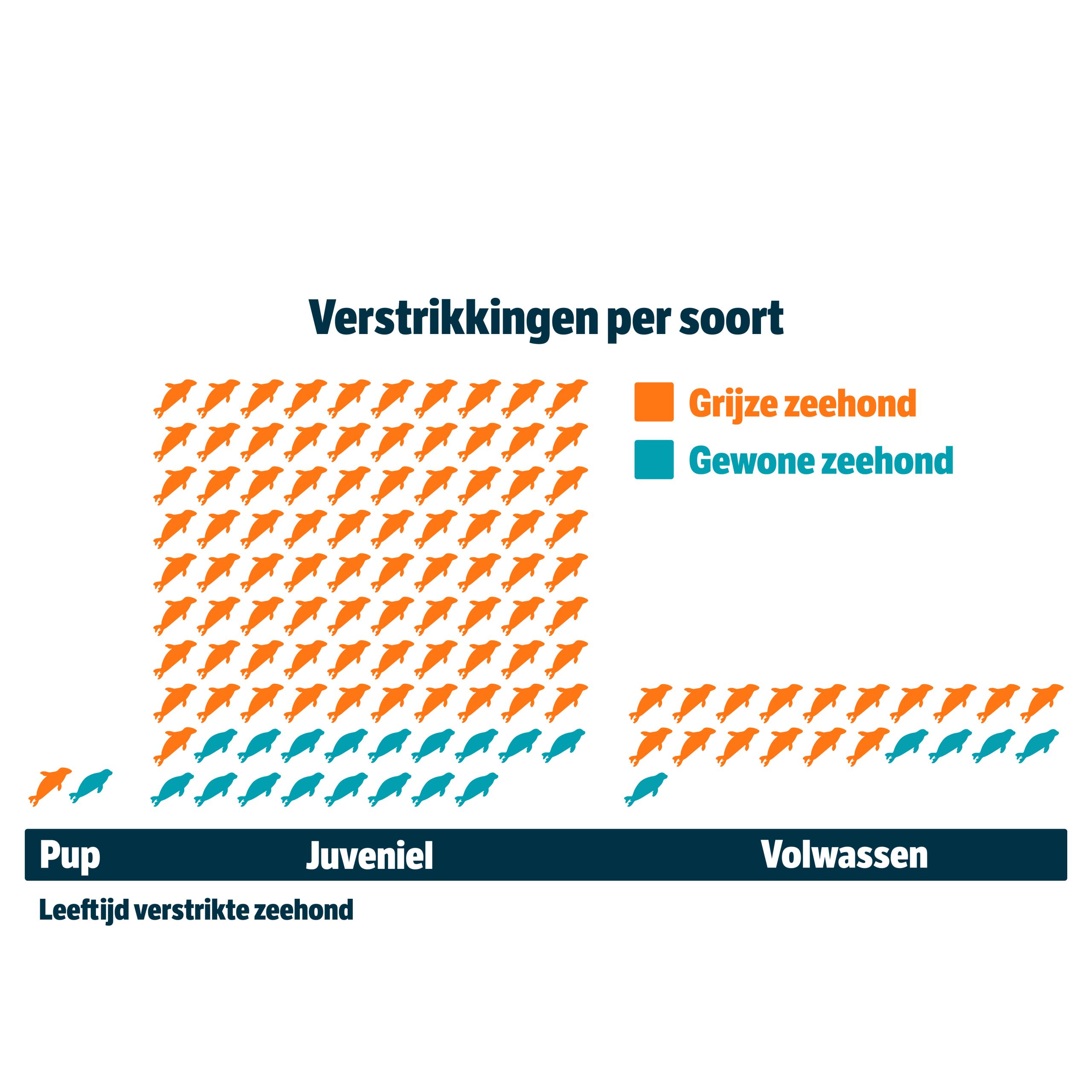 How do we help entangled seals?

If we find an entangled seal, we can usually help. In 3 out of 10 cases, we can help the seal on site and release it immediately. We prefer this, of course, because then the animal does not have to go to the shelter.

Seal guards look at an entangled seal on the beach to see what help is needed. For example, if the fishing net has not yet caused injuries, then the person can immediately cut the fishing net loose and release the seal. If the seal needs medical attention for the injuries, the seal will be taken to a shelter.

At the centre, our veterinarians check and take care of wounds on entry. Seals usually have a deep fat layer of a few centimetres; this means that the wound can sometimes be quite deep without the seal being injured inside the body. Once the wound is clean and grown closed, the seal can sometimes be released after a few weeks. The only thing the seal is left with is a scar, as you can see in the photo of seal Tefiti.